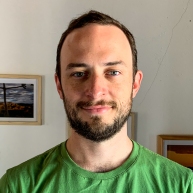 I’m a journalist and publisher living in Brazil with my family. Since March 2020, I’m the founder and editor of The Portager, an online local news startup serving my hometown in Northeast Ohio. I also work on the family business, Wolford Communications, a marketing firm founded by my father, and I’m the English language editor at il manifesto, an Italian newspaper. In the little spare time I have, I am a volunteer at Empowerment Avenue, helping incarcerated journalists get published. I believe all workers should own some of the value they create and democratically choose the terms of their employment. We get one life; no one she spend it in wage slavery.

I have a diverse background. I speak Spanish and Italian, and I’m learning Portuguese. I began my career in newspapers, interning at The Boston Globe, The Columbus Dispatch and the (Mogantown, W.Va.) Dominion Post. I was a general assignment reporter at the South Florida Sun Sentinel, where I wrote about pretty much whatever was going on in Palm Beach County. Later, I moved to New York and freelanced for Newsweek, amNewYork and a variety of other publications, while cobbling together an income writing copy for real estate agents and tutoring a fashion designer’s assistant.

In addition to Brazil, I have lived in Thailand, the Dominican Republic, Jordan, Italy, England and Vietnam. I was a sub-editor at the Bangkok Post and founded an independent magazine called Latterly, which covered human rights and international politics. We published from 2014 until 2018, and the magazine is in the Library of Congress. I have consulted on articles and publications for UNHCR, Transparency International, Publish What You Pay and the Baylor International Pediatric AIDS Initiative.

In January 2018, I became an early employee at Proton, the Swiss tech firm behind ProtonMail, the largest encrypted email provider. During my three years there, the service grew from five million users to over 40 million. As head of content, I oversaw all marketing and UI copy. Almost nothing got published that I didn’t approve during a critical stage of the company’s growth.

My wife is a human rights attorney, and we have two little kids. I’ve been to 31 countries. I like to read science fiction and political philosophy, study languages, hike in the mountains, play chess, trade stocks, fly my drone and travel with my family.

You can reach me at ben at pm.me.